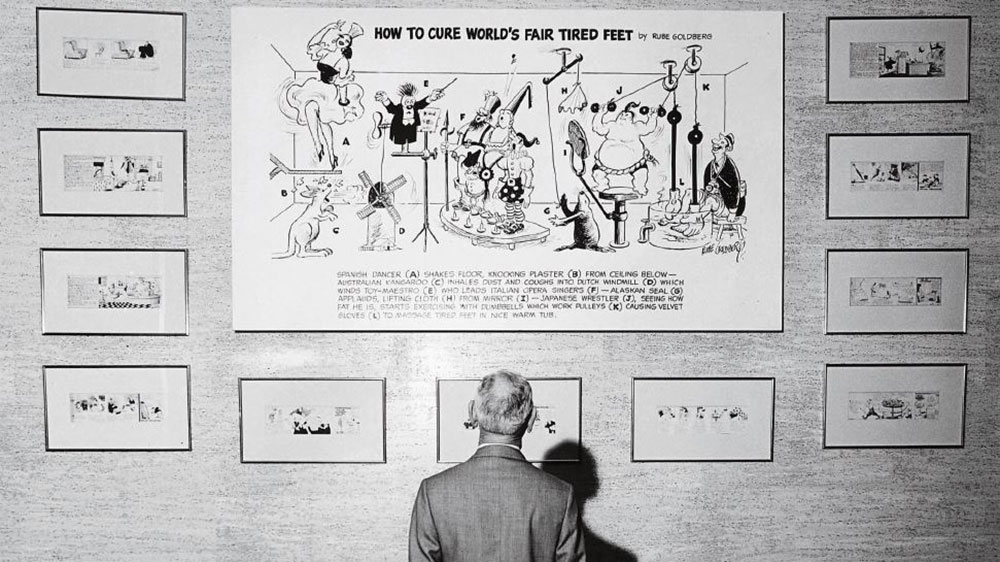 The Minnesota JCC is thrilled to re-open our theater and present The Two Lives of Rube Goldberg on the big screen for the first time!

Legendary cartoonist Rube Goldberg (1886-1970) was one of the great cultural icons of the 20th Century. His drawings of unwieldy fantasy inventions became a fixture of American popular entertainment and cemented his reputation as one of the most astute and prescient satirists of The Machine Age. In The Two Lives of Rube Goldberg, director Geoffrey George (Goldberg’s youngest grandchild,) explores Rube’s life, as well as the influence of his legacy, which continues to inspire new generations of creative thinkers, today.

Following the film, Jennifer George (legacy director of Rube Goldberg Inc. and granddaughter of Rube Goldberg) will join Geoffrey in a conversation hosted by Tom Lieberman about their grandfather and their commitments to his legacy. Join us for this special evening before the exhibit closes.

Come early for a final chance to see the exhibition, Simplicity Made Complex, which highlights the career and legacy of the celebrated and influential cartoonist.  The exhibition is largely comprised of rare original drawings, sculpture, memorabilia and an original Rube Goldberg-inspired machine created by Minnesota-based kinetic artist Robin Schwartzman. The exhibit will be closed when the film screening ends.